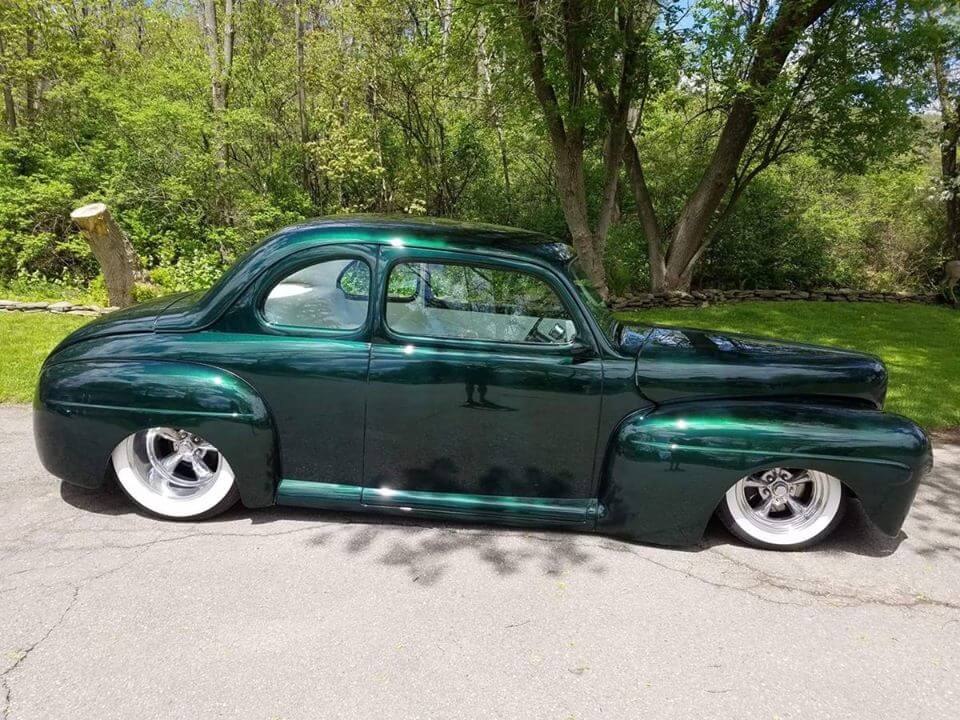 This is a beautiful custom job for this 46 Ford. It seems like everything imaginable has been done to this car. When I spoke to Bob he gave me the rundown.

It’s a 350 Chevy motor with a turbo 350 transmission and an 8 inch Ford rear end. It cruises down the road and Highway comfortably what’s 3.00 gears.

It was built by a hot rodder in New York between 2010-2016 by two separate guys. ( If I could find the names of the original builders I’ll give them credit here later on).

It has air ride suspension and killer suicide doors. And the special awesome paint is called Glade green pearl by House of kolor

The second of the two builders shaved all the bumpers, handles and signal lights. He also frenched in the headlights and suicide doors.

This beauty is absolute one-of-a-kind and thank you to Bob for letting me do a piece on it.

As I say with everything that I do I will hopefully do a follow-up on this down the road.

This website uses cookies to improve your experience while you navigate through the website. Out of these, the cookies that are categorized as necessary are stored on your browser as they are essential for the working of basic functionalities of the website. We also use third-party cookies that help us analyze and understand how you use this website. These cookies will be stored in your browser only with your consent. You also have the option to opt-out of these cookies. But opting out of some of these cookies may affect your browsing experience.
Necessary Always Enabled
Necessary cookies are absolutely essential for the website to function properly. This category only includes cookies that ensures basic functionalities and security features of the website. These cookies do not store any personal information.
Non-necessary
Any cookies that may not be particularly necessary for the website to function and is used specifically to collect user personal data via analytics, ads, other embedded contents are termed as non-necessary cookies. It is mandatory to procure user consent prior to running these cookies on your website.
SAVE & ACCEPT