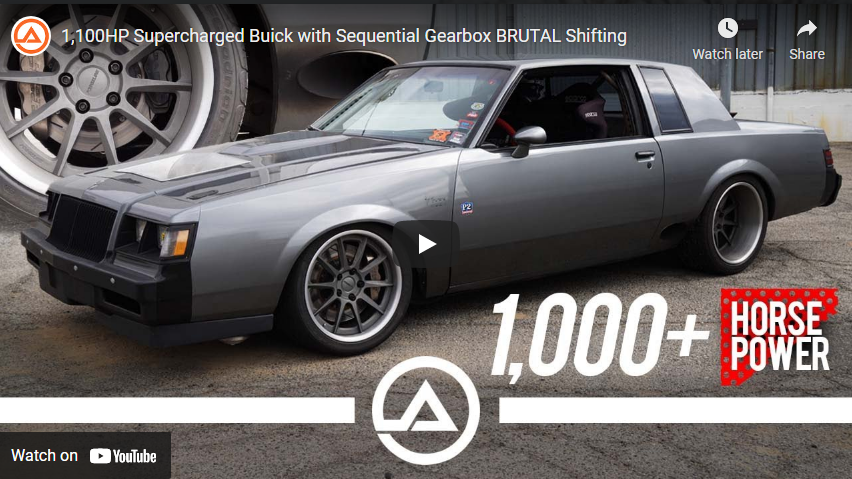 I couldn’t help but share this video. This car is 1100 hp supercharged. In my opinion, it’s what dreams are made of haha. I have an 86 Oldsmobile so this year of the car holds a special spot in my heart. And for anybody that doesn’t know anything from 78 to 88 that was made by General Motors is considered a G body. This includes Pontiac Grand Prix, Oldsmobile Cutlass, Chevy Monte Carlo, Buick Riviera, the grand national, or the T type, as well as the El Camino’s of all different kinds now there are a few variations frame and body type over the years but essentially an 86 Buick T type is the same frame originally that my car would’ve been on.

However, there is nothing about this car that’s related to anything I’ve ever sat in. In the video, the owner who is also piloting this beast describes, that he blew up the original motor while using it for autocross. He says this crazy one-of-a-kind car project just snowballed after he decided to do an LS swap with supercharger. It is also a full-weight car at roughly 3800 pounds as well as it has huge 335 tires on all four corners, a full roll cage, and a sequential six-speed gearbox. As you’ll see in this awesome video this guy absolutely rips through the years and can seemingly smoke the tires that will.

Which for me is so fun and did I mention it’s a completely street-legal car?

In my books doesn’t get any cooler than this. Hope you enjoy it.

This website uses cookies to improve your experience while you navigate through the website. Out of these, the cookies that are categorized as necessary are stored on your browser as they are essential for the working of basic functionalities of the website. We also use third-party cookies that help us analyze and understand how you use this website. These cookies will be stored in your browser only with your consent. You also have the option to opt-out of these cookies. But opting out of some of these cookies may affect your browsing experience.
Necessary Always Enabled
Necessary cookies are absolutely essential for the website to function properly. This category only includes cookies that ensures basic functionalities and security features of the website. These cookies do not store any personal information.
Non-necessary
Any cookies that may not be particularly necessary for the website to function and is used specifically to collect user personal data via analytics, ads, other embedded contents are termed as non-necessary cookies. It is mandatory to procure user consent prior to running these cookies on your website.
SAVE & ACCEPT